Louth Contemporary Music Society is one of the most adventurous music promoters in Ireland. Michael Dervan, The Irish Times

LCMS released its second cd Path on 1 Nov 2010.
Advance orders can be taken by clicking the add to cart button below for €15 (inclusive of VAT and P & P).

World premieres by Arvo Pärt and John Tavener are the main attractions of this anthology, though supporting material by Uzbek, Serbian and Georgian composers is equally engaging, particularly the two movements of Yanovsky’s “Chang Music IV”, which blend cello glissandi with koto-style pizzicato. ****Andy Gill Friday, 29 October 2010 The UK Independent

An Overgrown Path: Path from Louth Contemporary Music’s own label is one of those rare ‘stop you dead in your tracks’ discs. From the very first bars it is clear that something quite exceptional has been captured; this is an intelligently planned programme of important music played by exceptional musicians and recorded in demonstration quality sound…..what looks to be a strong contender for my 2010 disc of the year.

Classical Cd Reviews: That edge is a recurring feature in the following works. Most are calm, but not so eventless as to be ambient. The programme strikes an impressive balance between spiritual directness and intellectual engagement. The variety of approaches from the various composers means that that balance is reconfigured and re-evaluated with almost every work…..Happily, LCMS is the kind of organisation that is prepared stand out from the crowd. In terms of programming, that’s the real strength of this disc.

In 1985, the Italian composer Luigi Nono saw an inscription on the wall of the church of San Francisco in Toledo: “Caminantes, no hay caminos, hay que caminar” – “Travellers, there are no roads, but we must go on”. In 2010, Louth Contemporary Music Society (LCMS) take the listener on a rewarding journey on their new cd Path. First recordings of works by John Tavener ( Epistle of Love and Samaveda) and Arvo Pärt ( Von Angesicht zu Angesicht and Summa) are interspersed with new voices and sounds from different paths, Aleksandra Vrebalov from Serbia The Spell III, Uzbekistan courtesy of Dmitri Yanov Yanovsky’s Chang Music IV and Polina Medyulanova’s Ewige Ruhe plus Georgian composer’s Zurab Nadareishvili’s sublime String Quartet No1. The CD, which is released on the Society’s Louth Contemporary Music record label on 1 November 2010, comes in a beautiful limited edition release.

The CD opens with the beguiling sonorities of Yanov-Yanovsky’s Chang Music IV (1991), where the composer succeeds in transferring the sounds of the Uzbek Chang a traditional Uzbek instrument to the string quartet. Pärt’s Von Angesicht zu Angesicht (2005) is a contemplation on the First Letter of St.Paul to the Corinthians For now we see through a glass, darkly sung with great reverence by Eamonn Dougan and Patricia Rozario. The Dublin Guitar Quartet perform Pärt’s Summa (1997/1991) for the first time in a sumptuous version for guitar quartet under the guidance of the composer. Medyulanova’s meditative Ewige Ruhe (2004) allows a moment of calm for the departed to be followed by Vrebalov’s mystical The Spell III (2008) which includes sampled voices from the vocal group Moba. Tavener’s deeply moving Epistle of Love (2000) features the haunting voice of Patricia Rozario and lute like piano playing of Michael McHale. Nadareishvili’s reflective String Quartet No1,Mvt III (1987) is performed with great sensitivity by the Carducci quaret and the cd closes with the Indian influenced composition Sámaveda (1997) for soprano, flute and tampura.

Path is presented with funding from the Music Network/Arts Council Music Recording Scheme 2009, and financially supported by Create Louth.

Path has already received very favourable reviews such as the following from An Overgrown Path:
Path from Louth Contemporary Music’s own label is one of those rare ‘stop you dead in your tracks’ discs. From the very first bars it is clear that something quite exceptional has been captured; this is an intelligently planned programme of important music played by exceptional musicians and recorded in demonstration quality sound. Of the nine works on the disc, eight are given world premiere recordings including two by Arvo Pärt and two by John Tavener. The first two tracks are premiere recordings of two movements of Chang Music IV by the Uzbek composer Dmitri Yanov-Yanovsky played by the Carducci Quartet and the price of the disc is justified by those 15 minutes of music alone. Add to that Ewige Ruhe (Eternal Peace) from another Uzbek composer, Polina Medyulyanova, a quartet movement from GeorgianZurab Nadarejshvili and The Spell III for violin and electronics by Serbian Aleksandra Vrebalov and you have what looks to be a strong contender for my 2010 disc of the year. 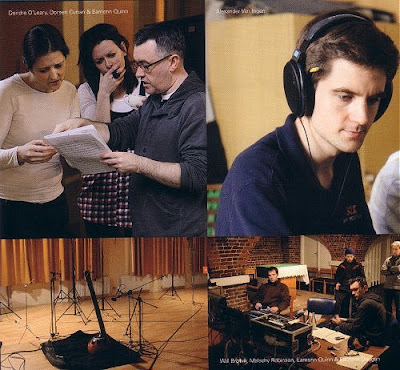 This post started out with Jonathan Harvey questioning some of classical music’s silly conventions. Path also questions established conventions. The disc departs from the single composer and single work convention. Every featured composer is living, they are geographically and ethnically diverse, two are women, the music is performed by forces that range from a guitar quartet through to the combination of voice, flute and tampura (John Tavener’s Sámaveda) and the recordings were made in four different locations across two countries . The release also swims against the download tide and comes as a beautifully packaged CD complete with that threatened artform of the MP3 world, session photos, some of which accompany this post. Finally, the introductory essay by Ivan Moody quotes Dostoyevsky and Nono rather than Charles Hazlewood.

Path is the second release from one of the smallest and most fragile of the new breed of musician run independent labels. On the day it arrived I had been listening to two disappointing new ‘pot boiler’ releases from independent label artists that are usually among my enthusiasms, Jordi Savall’s Folias Criollas and the Hilliard Ensemble and Jan Garbarek’sOfficium Novum. When I heard Louth Contemporary Music’s first release last year I wrote “If I were CEO of a major corporate record label I would send a copy of A Place Between to every member of my classical division”. Can someone now please send a copy of Path to AliaVox and ECM?

Kevin Volans to write a new work for string quarte

Sunday 24 May the premiere on Belgium television of La…

Review of LCMS cd Klang in the Sunday Times :…